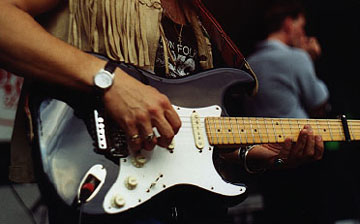 From one international artist to entire platform

How this project with an unexpected encounter with an international artist has grown into a platform of touring artists and global festivals. How the whoisontour network project started goes back to 1997. As a local artist agency we met a Canadian singer who lived in our hometown in the Netherlands. She was one of those artists who regularly performed at International music festivals all over Europe.

She came to our office with a problem. She had independently booked a tour at various festivals. She had sold the tour as a double act, she as a lesser-known artist with a well-known American band. This was the ideal opportunity to promote herself.

Only three months before she would go on tour she found out that the American band had a tour in the USA on the same dates and did not know anything about a tour in Europe. The agent with whom she worked was not competent and had given her the impression that it was all well arranged with the American band, unfortunately this was not the case.

She had to cancel her tour or try to make a deal with the festivals that contracted both her and the American band. A difficult job because the name of the American band as headliner had already been published.

Her question to us was whether we could help her to limit the damage and see if we could make the tour happen anyway.

Festivals in Europe were completely new to us... But we saw a challenge in it. We agreed that we would try to make a deal with the festivals.

One of the festivals said they wanted to cooperate, but in return they had the question whether we could arrange another Canadian artist so that there would still be a double act as it was promoted to their audience. They asked if we could contract Laura Vinson. Vinson had performed in 1988 as an artist in the 'Canadian All Star' tour at the festival with her band and that had been a huge success.

This booking turned out successful and we had a double act tour.

Afterwards, the festival had a completely different picture of Laura Vinson. In 1988 she was a well-known country singer but shortly before the toure in 1997 she decided to follow her roots and start make her music from her heart as Canadian Metis / First Nation with many native influences. Laura came to the festival with native dancers and lyrics about her heritage. Almost the opposite of the Country music that was expected. But the show was a great success and received a lot of attention in the national press.

A new business was born for us. It was a great experience to travel Europe and represent these artists.

Soon after the tour we discovered that many more bands from other countries regularly tour in Europe. But we decided at that point to focus only on Canadian groups.

It grew and we got more and more offers. Because it was not easy to get a record deal, we set up our own label and publishing company and closed a distribution contract to ensure that music from touring artists would actually be available all over Europe.

In the course of time, artists' questions changed how we could help them. Under pressure from budgets and changing wages that were offered, artists started to do more themselves. However, the most important question remained: 'Do you know where we can perform when we go on tour?'

Many artists book a few dates, come over and then they want to fill in the rest of the open dates when they are in Europe. Not an easy task.

A similar question came from the festivals, music clubs etc: 'Do you know artists who are touring in a certain period and who fit our event in terms of music style?'

These last two questions have become the basis of our new whoisontour community project.

Here artists can present themselves with text, photos, music and video and indicate in which period they will tour in Europe. They can indicate which dates are still open and within which regional distance they want to travel.

Buyers of live music can indicate what they are looking for, when they have an open spot and for example what they offer in terms of travel and accommodation costs.

The matchmaker function is the beginning of the new whosiontour.org community.

In the coming time we will invite artists to join and publish their next tour. Also festivals and music clubs that include international touring artists in their programs are welcome to create an account to get in touch with the right artist for their event.

Keep following us, we will add more and more artists, festivals and possibilities and expand the information flow.

Our goal is to become a leading platform for independent touring artists throughout Europe and to promote and stimulate more performances, fame, new music and especially fun in music.